In today’s age of sustainability, cities face the challenge of staying green while coping with the massive growth of urbanization

Older cities have to adapt their existing infrastructure to better suit new sustainable technology, while newer cities are given the challenge of finding innovative new ways to build more eco-friendly human habitats.

Major metropolises all over the world are either embracing sustainability head-on and changing how they function or creating new inspiring ways for cities to function with sustainability in mind. All of the western world seems to be competing for the title of the greenest city as major capitals battle to be the first to create and conquer green initiatives. It is not only cities – even small towns are getting in on the action.

Even somewhat unheard of places are trying to lead the way with sustainable initiatives. A small town in New South Wales, Australia, became the first in the continent to ban bottled water, setting a high precedent for the rest of Australia to follow. Rock Port in Missouri, a town with a population of only 1300, has achieved total self-sufficiency with the use of only 4 windmills.

Towns like these are showing the world that change starts at home! Embracing the power of your local community can drastically alter your impact on the world. In some circles in the western world, it can seem as if sustainability is at the forefront of everyone’s mind.

Sadly, this is not always the case – there are many examples of major metropolises that neglect any responsibility to the environment and focus only on their own growth.

Dubai is the first dirty culprit that comes to mind. The relatively new development is focused entirely on rapid growth and does nothing to ensure any level of sustainability. Despite being built on oil reserves, it is running out of energy to power itself! The ridiculous amount of energy needed to maintain all the ongoing construction, dispose of waste, and keep the city ticking, was quite possibly overlooked in it’s hasty ‘build now, think later’ style of rapid urbanization.

Development in Dubai has caused a massive rise in fossil fuel stations, cars and waste, all of which have contributed to air pollution which has resulted in a substantial drop in air quality. This is not a problem that is unique to Dubai – all over the Middle East, the quality of air has been dropping substantially. Greenpeace has reported clusters of particularly toxic, carbon-infused air located in the regions of Saudi Arabia, Kuwait, and Lebanon. Dubai, however, has been rapidly increasing in toxicity and is now the not-so-proud holder of the most air pollution in the already polluted area. Dubai is currently ranked as the 10th most polluted region in the world.

As common sense would dictate, air pollution in a region is not only the problem of that region. The people living there will be more immediately affected – due to the undeniable link between air pollution and ill health – but air pollution is a global problem that contributes to global warming throughout the entire world.

Due to it being a global trading power, Dubai has been more susceptible to criticism that other eastern states. The good news in all the fog is that Dubai is now caving to global pressure and has released a mission statement about how it aims to go greener.

A lot of this pressure is coming from the Emirates Environmental Group. Thanks to the EEG and other external sources, Dubai now plans to have at least three quarters of its energy from green sources by 2050.

One sector where Dubai is focusing its efforts towards greener energy and sustainability is with its public transportation. The Dubai metro is a much newer development that many countries host, it only opened in 2009.

Transport has become one of the focuses of their green initiative for two reasons:

Dubai has revealed plans to implement more public transport and make it more accessible, hopefully cutting down on the use of cars and the fossil fuels that come with them.

Countries that have developed good public transport systems are inherently greener. Cars have been a huge and devastating source of air pollution since their creation. Public transport is at the forefront of many city’s green initiatives. With sustainability becoming a growing global concern, what else can cities focus on in the quest to go greener?

The Netherlands with its iconic old windmills is one of the leaders in wind power. The old windmills are not the only ones you will find there. The wind is being harvested for power in the Netherlands in massive amounts. The small nation boasts the world’s largest wind farm which is working every day to harvest the power of the nearby North Sea.

Removing fossil fuels comes hand in hand with moving towards green energy. Many leading cities are completely divesting from fossil fuel energy; meaning that they are taking the money that they have put towards fossil fuel energy and putting it somewhere else. This is happening all over the world from Kansas City to Copenhagen, and it is making a powerful statement about the world’s need for fossil fuels – or maybe we should say, lack thereof.

Green transport initiatives are happening all over the world. They are increasingly important as we realize the urgency of moving away from fossil fuels. In many European countries, public transport makes use of electricity instead of petrol and fossil fuels. This is a great step in the right direction, especially in cities that are powered by renewable energy.

In some places, there is a huge emphasis being put on the conservation of natural landscapes. In places where there is not much to conserve, cities are taking action by incorporating natural elements in their architecture plans. This can be anything from planting trees on the sidewalks, to developments in places like Singapore that are striving to build gardens into the city walls.

Singapore is a great example of a newly-emerged green city. The urban giant is focused on becoming a ‘city in a garden’. There is an annual Tree Planting Day, showcasing how even average citizens can get in touch with nature for the benefit of the city. There are also numerous green initiative projects to be found in waste management, agriculture, and architecture.

An office building in the middle of the city district. It is covered in plants and foliage and hosts and impressive ‘sky forest’ on its roof. 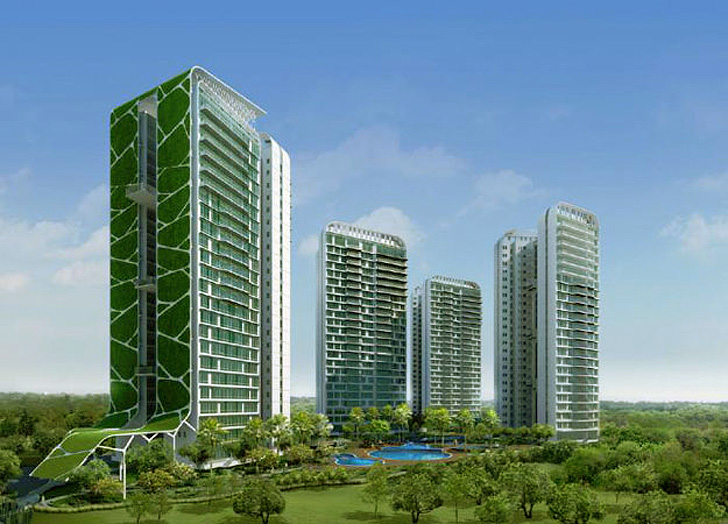 Treehouse is another gorgeous plant-covered building. It is a residential building block and it holds the Guinness world record for being the world’s largest vertical garden. The plants that it is adorned with filter pollutants and carbon dioxide out of the air to reduce the residential estate’s carbon footprint.

Probably the most impressive innovation to come out of Singapore is the beautiful and luxurious trash island (Pulau Semakau) that functions as a holiday tourist resort and an amazing trash solution all at the same time.

How do you turn trash into an island with a flourishing ecosystem?

This amazing feat achieved by Singapore is one that the rest of the world could learn from! Established in 1999, Pulau Semakau is the world’s first ecological offshore landfill. The process is simple – Singapore incinerates its garbage and turns it into ash. It is then shipped to the island, where it is dumped and then covered in soil, allowing it to become an ecosystem of its own. Singapore takes special effort to make sure that all toxicity is removed from the ash before it is dumped. Plants are planted in the soil and birds in the area are drawn to the island, feeding off and nourishing the plants. This amazing project now functions as a tourist resort and is said to be one of the best locations to bird watch in all of Singapore! The beautiful and scenic island does not resemble trash in the slightest and functions as a holiday resort. It is a shining example of sustainability in a world of toxic waste and landfills. 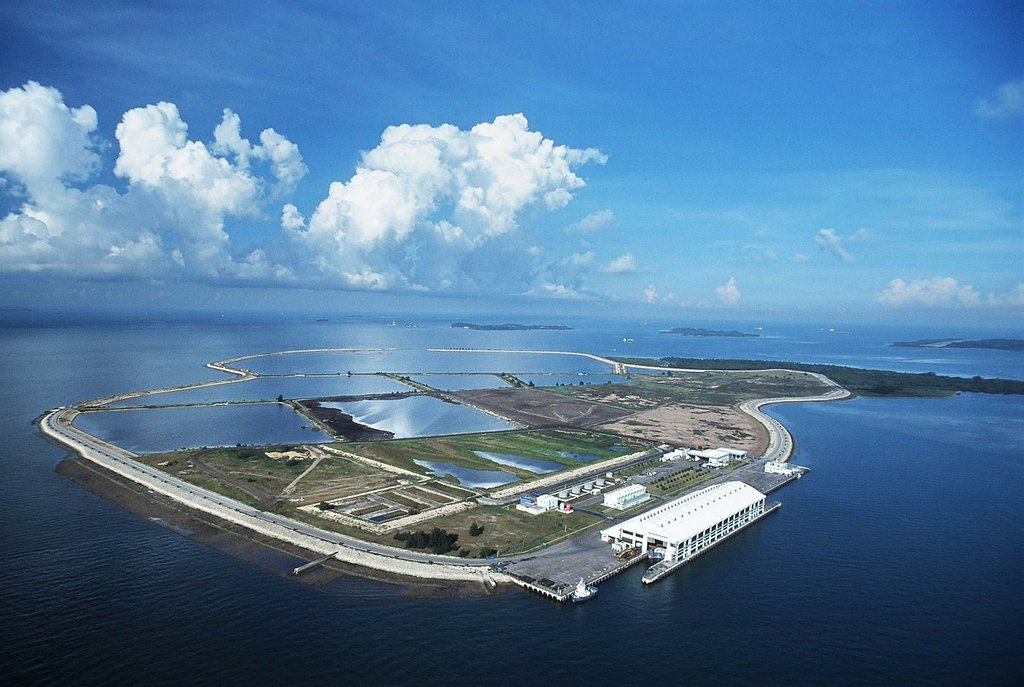 While not every city will have the available resources to create something as phenomenal as Singapore’s trash island, a lot of cities are taking steps to improve their existing infrastructure and become more sustainable in the process.

All the different approaches that different cities are taking to implement green energy are still evolving, and it is an exciting and creative time to live in. We are still seeing a lot of new initiatives unfolding and determining what works and what will shape the future for sustainable living.

Much like with any major change in history, some players are running ahead and some are lagging behind. Some are trying new concepts that are doomed to fail, and some are falling back to and relying on old ways. If history really does repeat itself, then the winners will always be those who are running ahead with new and innovative ideas.

Germany is a world leader in both solar power and wind power, aiming to move completely away from fossil fuel energy as soon as possible. In 2018, they released the world’s first hydrogen-powered train, signaling the start of a new transporting age designed to challenge the traditional and unsustainable diesel engines of the past. The train, called the Coadia iLint, is entirely powered by hydrogen and releases only water and steam as a byproduct. It is the most sustainable train model to date.

Sustainable transport initiatives like this are one of the most impactful ways that cities are making a difference. As of 2006, transport was responsible for 13% of greenhouse gases, with the expectancy of that number rising to 30% by 2030 if nothing had changed. These numbers have urged cities and private businesses alike to adopt new transport initiatives worldwide.

Some change is happening from the inside of private businesses, and some is happening aided by governments who are focused on the future. Soon, we will surely see the results reaped by countries who have fully committed themselves to sustainability.

Sweden is already seeing great success in its sustainability initiative. After making initial investments into becoming Europeans first country to depend solely on renewable energy, it is already seeing the reward both financially and in its carbon footprint. Renewable energy can be expensive to embrace in the initial phases because it often means a lot of new technology needs to be installed and old infrastructure needs to be removed. This hurdle should not stop anyone, because as places like Sweden will tell you, the rewards start to pour in when the first phase is completed and renewable energy is being harvested in the place of old and outdated fossil fuel that costs money every time it needs to be purchased!

Sustainability for cities simply makes sense. Financially, environmentally, and for the health and well being of citizens.  It is the way of the future and cities that do not embrace sustainability will be left behind and result in a ton of preventable harm towards the environment. Sustainable cities are working hard to ensure the needs of their populations are being met while striving to ensure that the needs of future generations will not be compromised. Future generations will either thank us for our efforts, or they will be left to clean up our mess! It is up to us to make the change before it is too late.